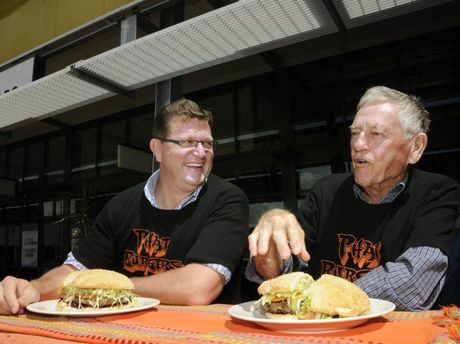 For the record and for those who have never tried the signature burger, the Burghoffer – named after famous Toowoomba business identity Clive Berghofer – includes a one-pound beef patty with a roll, salad and sauce.

1. The first one ever

THANK-YOU YouTube for keeping alive the video of the first ever Burghoffer challenge.

Uploaded on September 27, 2009, the video is tagged as the “official video of the Phat Burgers Toowoomba Burghoffer Eating Competition” and is guaranteed to make you laugh.

Case in point is the bloke who shoves his head in a bucket mid-scoff, then keeps on chomping.

On March 8, 2014, a boy from Brisbane claimed the prestigious title of the best Berghoffer scoffer.

He put to shame the celebrity panel who took part in the heats, including Toowoomba North MP Trevor Watts and the burger’s namesake, Clive Berghofer.

The challenge was to mark the opening of the Northpoint store which will also continue trading after the Ruthven St store closes.

IF THE results of the Phat Burgers eating competition had any real impact on the 2016 local council elections, we’d have a very different set of people in our chambers.

In fact, in the lead up to the highly public local government election, it was only the newcomers that dared put their bellies on the line and scoff it off in the challenge.

Candidate Voelcker Sapolu emerged the early favourite and indeed the winner of the March 17, 2016, challenge.

In fact, the council election eating challenge is virtually a right of passage for our civic leaders, with the 2012 candidate hopefuls daring to give it a shot.

Perhaps once is enough for our candidates?